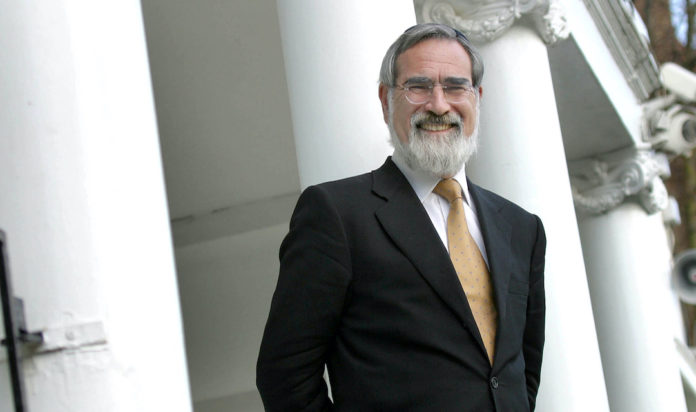 It is with deep sadness that we would like to take this opportunity to remember the late Chief Rabbi, Lord Dr Jonathan Sacks. He was an exceptionally talented yet approachable person, who grew up in Finchley. He attained a scholarship to Cambridge, graduating in Philosophy and continued with research to be awarded a PhD. On a trip to New York, he consulted with the late Lubavitch Rebbe who encouraged him to enter the UK Rabbinate.

He attained a double Semicha and became lecturer, then Principal, of Jews College, London. He served as Rabbi in several flagship constituents of the United Synagogue before being elected to the office of Chief Rabbi in 1991 in succession to Lord Jakobovits. He enhanced the services of the US, with the publication of a weekly sedra sheet for congregants and the production of new editions of the Siddur and Machzorim for the festivals. He was also very concerned for improving Jewish education for the next generation. He initiated the youth division ‘The Tribe‘ and backed the move to open up more Jewish primary and secondary schools in Greater London. He was a prolific writer with many essays collected into numerous books. He was also an inspiring speaker, contributing to BBCs ‘Thought for the Day’. He spoke with authority whether on issues affecting our Jewish way of life or our society in general, earning the respect of everyone both in the UK and abroad. He has made several videos regarding Holocaust Memorial, available on UTube. After retirement in 2013, he was still active in overseeing his publications and being a guest speaker at international conventions, receiving many awards and honours. Clearly, he can be credited with raising the profile of Orthodox Judaism in our society. All this was only possible with the support, encouragement and sacrifice of his dear wife Lady Elaine, who is patron of our charity FD-UK. Our deepest condolences go out to Lady Elaine, their children and all his family, wishing them all long life.